The Class Notes page gives alumni an opportunity to know what is going on in the lives of other LWC family members. To post a Class Note, send an e-mail with your name, year of graduation, and class note information (including pictures) to the Alumni Office. Pictures should be in JPEG format, be at least 100 dpi and be no smaller than two inches-by-two inches. Class Notes can be mailed to:
Alumni Office
Lindsey Wilson College
210 Lindsey Wilson Street
Columbia, Ky. 42728
or sent via e-mail to: alumni@lindsey.edu

Rev. Timothy Smith ’89 completed his PhD in Counselor Education and Supervision from Lindsey Wilson College in May 2020. Chelsea Barnett ’15 Simmons completed her Masters of Science in Higher Education in 2016 from the University of Kentucky and is currently pursuing her Doctorate of Higher Education Leadership & Management from Walden University. Russell Dow ’17 completed his Master of Arts in Interactive Design from Lindsey Wilson College. Kristi Slavens ’15 works as a Case Manager at FRS Counseling in Hillsboro, OH. Dr. Kathryn Blair ’07 Plymale obtained her Phd from the University of the Cumberlands in 2018. Terri Dotson ’05 is a Clinical Coordinator at Mountain Comprehensive Care Center in Prestonsburg, KY. Dr. Melissa Carlton ’90 is an Assistant Professor of Computer Science at Houston Baptist University in Houston, TX. Megan Coomer ’07 serves as the Deputy Clerk at the Administrative Office of the Courts in Columbia, KY. Jessica Phelps ’06 Glass is a Loss Prevention Specialist at Shop HQ in Bowling Green, KY. Chris Lashley ’92 works as a Technician at Ford Motor Company in Louisville, KY. Rev. Christopher Lee ’98 serves as the Senior Pastor at Christ Memorial Baptist Church in Cincinnati, OH. He also serves as the State of Ohio Bishop for Alpha Omega Church Ministries International. Elizabeth Leaver ’00 is currently pursuing an advanced degree in Hospitality Management from the University of Houston, while serving as the Director of Operations at Rice University in Houston, TX. Presley Weddle ’18 works as a Paraeducator at Casey County in Liberty, KY. Emily Flatt ’14 is a Documentation & Communication Coordinator at Children and Family Counseling Associates in Harrodsburg, KY. Amy Ensor ’04 Drake works as Supported Employment Coordinator at Centertone in Louisville, KY. Rev. DeResha Walkup ’11 works as Social Service Work for the Department of Community Based Services. Marlena Thornsbeary ’15 works as a Counselor at a Recovery Center in Hazard, KY. Brandon Garrett ’10 works for the Social Security Administration in Campbellsville, KY as a Claims Specialist. Lane Thompson ’17 serves as a Senior Accountant at Louis T. Roth & Co., PLLC. in Louisville, KY. Anna Sundean ’13 works as a Teacher at the Frankfort Christian Academy in Frankfort, KY. Jamie Miller ’05 serves as an EFL Teacher in Goyang, South Korea. Ruth Olson ’13 Jeffries is employed by Sequel Youth and Family Services as a Therapist in Gainesville, FL. Pamela Humfleet ’08 is employed by Necco as a Treatment Director in Elizabethtown, KY. Kindra Ewing ’04 Jones is a Cooperative Extension Agent for 4-H Youth Development in Leitchfield, KY. Ashley Garrett ’07 is an Instructor at Cameron University in Lawton, OK. LaDale Simpson ’04 Ramsey works as a Physician’s Assistant at Southern Emergency Medical Specialists in Louisville, KY. Jessica Wells ’12 is a Criminal Defense Investigator with the KY Department of Public Advocacy in Harlan, KY. Caleb Irvin ’12 is an Accounting Assistant at Brown & Brown Insurance in Columbia, KY. Dr. Sara Brown ’01 is a Doctor of Chiropractic Medicine at Revive Chiropractic Center in Lexington, KY.

John Dillard ‘91 graduated with a Master of Arts from the University of the Cumberlands in 2018. Verlin Bryant ‘18 obtained her Master of Education in Counseling and Human Development from Lindsey Wilson College in 2018. John Brown ‘13 completed his MBA and PharmD in 2017 from the University of Kentucky. He is now working as a Graduate Research Assistant at the University of Kentucky. Gloria Moore ‘11 San Miguel welcomed daughter, Luna on August 16, 2018. Daniel ‘14 and Amanda Bland ‘14 Farris welcomed daughter, Danika Farris, on August 28, 2016 and son, Micheal Farris, on May 10, 2018. Leanna Begley ‘14 married Jesse Etheridge on Nov. 17, 2017 Haley Cook ‘18 Overbay is employed at Appalachian Regional Hospital as a Registered Nurse. She is also pursuing a Master of Science in Nursing at Carson Newman University and married Dalton Overbay in July 2018. Nicole Bernard Garner ‘15 and husband Chad Garner welcomed son Luke Aaron Garner on March 5, 2018. Dr. Justin Whitney, DMD ‘06 works as Assistant Professor of Comprehensive Dentistry at the University of Louisville. Justin and wife, Galen Whitney, welcomed daughter Grace Whitney on November 24, 2017. Kyle Edwards‘06 and Julie welcomed daughter Eleanor on December 24, 2018. Nick and Shana Bowen ‘10 Wallace welcomed daughter Lola Brooke on November 23, 2018. 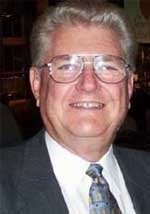 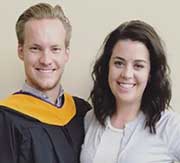 Stefan Swecker ’11, with his wife Chelsea ’11, graduated in May from Western Carolina University as a Certified Registered Nurse Anesthetist. Brittany and her husband Luke Stephens became the proud parents of their first child. Adri Mae Stephens was born on May 3, 2017. Casey McGowan ’14 - On May 8, 2017, I earned my Juris Doctor with Honors from Emory University School of Law. This month, I will begin a two-year term as a Staff Attorney for the U.S. Court of Appeals for the Eleventh Circuit. Stuart ’04 and Leigh Ann ’05 Scott welcomed their third child to the family, Ean George Scott, in June 2016. Brooke Spatol ’14- I graduated on the 21st of May with a Masters of Letters in Shakespeare & Performance, and have started my Masters of Fine Arts in the same concentration at Mary Baldwin University. Trey Ball ’11 - Graduated with an MBA came from the University of the Cumberlands in Williamsburg, KY in May 2017. I am a Loan Officer for United Cumberland Bank Jamison Ornella Rogers ’08 - has worked with the Social Security Administration for 8 years. Current position is a Claims Specialist. She is married and has two boys Jasper and Logan. Lorran Hart Ferguson ’14- I graduated from University of Kentucky College of Law in spring of 2017 and then served as the Executive Editor of The Kentucky Journal of Equine, Agriculture, and Natural Resources Law. I currently work for Kentucky State Treasurer, Allison Ball.