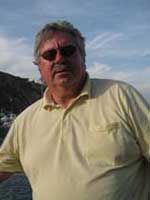 After four years as an officer in the Navy during the Viet Nam War, Dan joined the staff of the Flint (Michigan) Journal where he specialized in health affairs and feature writing. His months-long investigation of substandard ambulance services in Genesee County led to creation of modern emergency medical systems in the Flint Fire Department and the Genesee County Sheriff's Department. These systems are still saving lives more than 30 years later. In his 10-year career at The Journal, and the Capital Bureau of Newhouse Newspapers, Dan covered everything from county courts to the state Legislature.
Following his graduate studies, he joined the Public Relations staff at General Motors corporate headquarters in Detroit, where he spent four years developing and implementing executive awareness and training programs in employee communication. From GM, he went to Weyerhaeuser Company in Tacoma, WA, where he spent four years successfully merging organizational communication with modern techniques for quality improvement and customer satisfaction. From Weyerhaeuser, Dan worked with several communication consulting and training firms, assisting such clients as IBM, Johnson & Johnson, Morgan Stanley and Software AG, in projects that sometimes lasted two years or more. In early 2007 Dan completed a play about famed but aging wit Dorothy Parker and her challenges teaching a college literature class in Southern California. The play was performed by the Isis Theatre Company in Idyllwild, CA, in June, 2007. He joined the faculty at Lindsey Wilson College in the fall of 2007.

At Lindsey Wilson College, Dr. Sexton currently serves as the Dean of the School of Business and Communication and has previously served as Freshman Advisor, Director of Freshman Year Experience, Instructor of Communication, and Assistant Professor of Communication. He was awarded the LWC Student Government Association Teacher of the Year award in 2014 and 2016. He is a member of the National Communication Association, Eastern States Communication Association, National Coalition for Dialogue and Deliberation, Lambda Pi Et (National Communication Association Honor Society), and Sigma Tau Delta (International English Honor Society).
Dr. Sexton is a nomadic native of South Central Kentucky having lived in Monticello, Burkesville, Russell Springs, Columbia, Campbellsville, and Albany, with the greatest amount of time rooted in the latter. He now resides in Greensburg, KY, with his wife Leah and three children, Kate Elisabeth, Max Thomas, and Hayes David. He earned a bachelor's degree from Lindsey Wilson College in Columbia, KY, with a double major in Communication and Christian Ministries, and was the recipient of the 2004 President's Award. While at Lindsey Wilson College, Dr. Sexton was a member of the LWC Singers, Student Ambassadors, and Students Interested in Government. Additionally, he received a scholarship to study abroad at the University of Oxford in the United Kingdom. Dr. Sexton received his master's degree at Western Kentucky University in Bowling Green, with a research focus in interpersonal and organizational communication. In May 2017, Dr. Sexton completed his Ph.D. at the University of Kentucky in Lexington, where his dissertation was titled "Exploring the Influence of Students' Perceptions of Instructional Message Content Relevance and Experienced Cognitive Load on Students' Cognitive Learning." His research is concentrated at the intersection of instructional communication, interpersonal communication, educational psychology, and leadership. Dr. Sexton has presented scholarly research locally, regionally, and nationally and is a published author in several well respected academic journals. Outside of the classroom, Dr. Sexton's interests includes coaching his kids sports teams, traveling, farming, Disney, living a missional life, and empowering the powerless.

He is active in post-graduate professional development, including completion of intergenerational and Xtreme Aging training certificates from the Macklin Intergenerational Institute in Ohio. Before coming to Lindsey Wilson College in 1999, he taught communication courses and coached debate teams at four other colleges and universities, where his teams consistently competed in national tournaments and placed second to Harvard University in the 1985 National Debate Tournament. He has conducted workshops and delivered scholarly presentations at numerous professional meetings and published articles in the Arkansas Business and Economic Review, Journal of the Economic and Business Historical Society, Iowa Journal of Literary Studies, Journal on Excellence in College Teaching, and Public Relations Review. An entry for the Encyclopedia of Arkansas History and Culture and book review for the Oral History Review are forthcoming in 2010 and 2011.
Dr. Phelps is a native of Arkansas reared in Denton, Texas, a city in the Dallas-Ft. Worth metropolitan region. He earned a bachelor's degree from Henderson State University in Arkansas, where he double-majored in History and Speech, and participated in intercollegiate debate competition. He earned Master's and doctorate degrees from the University of Iowa, both in the discipline of Communication Studies, and completed additional graduate and professional studies at the University of Arkansas at Little Rock's William H. Bowen School of Law and the University of Houston. Reflecting his wide range of scholarly interests and commitment to interdisciplinary studies, he is currently a member of the American Communication Association, Anthropologists & Sociologists of Kentucky, Arkansas Historical Association, Kentucky Communication Association, National Coalition for Dialogue & Deliberation, Oral History Association, and Southern Regional Honors Council; and serves on the editorial board of the Journal of Applied Learning in Higher Education. When not working, Dr. Phelps enjoys spending time with family and friends, reading good books and watching classic movies. 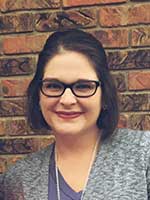 Dr. Furkin served the college in a few capacities over her time here since 2003. She began her higher education career in the Registrar's Office before moving into her Freshman Advisor role in the First Year Experience Program, which she held for 8 years. She also taught as an Adjunct Instructor for Communication during that time. In her 9th year in FYE, she served as Co-Director of the program. She accepted a faculty position in Communication in 2016. These various roles she has held at the college have provided her with a well-rounded understanding of the inner-workings of the institution, as well as a strong foundation in intentional advising and cultivating positive interactions and relationships with students.
Dr. Jennifer Furkin resides in Columbia with her husband Josh (a special education teacher in Adair County and graduate of LWC), her son Bowen, and her dog Chance. She has taught a variety of classes for the Communication program at Lindsey Wilson. She also serves as co-sponsor for the Communication Honor Society, Lambda Pi Eta. Aside from serving as a faculty member for Communication, she is the Program Coordinator for the Interdisciplinary Studies major. Dr. Furkin's research interests are within interpersonal communication, specifically related to learning more about mothers and their communication with other mothers regarding parenting choices. She enjoys engaging with students on communication research trips where students get to critically analyze the communication processes happening all around them. In the classroom, she is motivated by thoughtful, engaging student discussions regarding communication concepts and topics. Dr. Furkin enjoys attending various Lindsey Wilson events, spending time with family, and watching her son compete in swimming competitions. 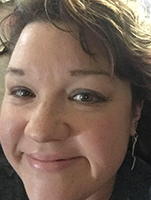 Dr. D to her students, her dissertation focused on young adult sibling group relationships and secret keeping. Since then, her research interests have shifted to communication education, the student-professor relationship, and communication pedagogy. She recently had an article published on Facebook friending between faculty and students and several short pedagogical articles on email etiquette, incorporating Universally Designed Learning (UDL) into course design, and ways to increase student participation in course evaluations. Most recently she has begun research on a series of articles looking at communication programs in various states. She is a life time member of Western States Communication Association and has served it in a variety of roles.
Dr. Audrey Deterding was born and raised on a farm in southern Illinois but has lived a wandering adult lifestyle residing in Pennsylvania, Indiana, Arizona, Missouri, and now Kentucky. Always open to new ideas and adventure, she has a steadfast rule when moving about not living in a state she's lived in before as there's too much to see to stick with what one already knows. When not in the classroom, Dr. D enjoys traveling and has been to all 50 states and several European countries.