Director and Professor of Counselor Education and Supervision 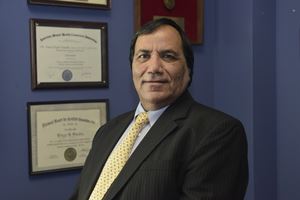 Dr. Daya Singh Sandhu, Ed.D., NCC, NCCC, NCSC, LPCC, is the Director of Research and Professor of Counselor Education and Supervision at the Lindsey Wilson College. He was formerly a professor of research and chairman (1996-2004) of the Department of Educational and Counseling Psychology at the University of Louisville. Dr. Sandhu holds six graduate degrees including Bachelor of Arts, Bachelor of Teaching (B.T.), and M.A. (English) from the Punjab University, Chandigarh, India. In addition, he earned M.Ed., Specialist in English, and Doctor's Degree in Counselor Education and Supervision from the United States.

Dr. Sandhu has served the profession of counseling psychology with distinction for more than 30 years. In addition to more than 50 refereed journal articles and 80 book chapters, Dr. Sandhu has authored or edited thirteen textbooks. Some of Dr. Sandhu's notable textbooks which significantly impacted and contributed to the counseling literature include:

Throughout his professional career, Dr. Sandhu has received several distinguished awards including: Fulbright Senior Research Scholar Award; Fulbright-Nehru Senior Research Award; AMCD Research Awards (twice); President's Distinguished Faculty Award for Outstanding Scholarship, Research and Creativity; Mississippi State University Alumnus of the Year Award, and the Kentucky Counselor Educator of the Year Award (2001 & 2012). In 2001, Sage published Dr. Sandhu's autobiographical account of 15 pages to recognize him as one of the pioneers of multicultural counseling and development. In 1996, Dr. Sandhu was selected as an Albert Ellis International Scholar to receive the specialized training in Rational Emotive Behavioral Therapy at Albert Ellis Institute of REBT in New York.

The university-wide selection committee at the University of Louisville selected Dr. Daya Singh Sandhu to receive the 2013 President's Distinguished Career Achievement Faculty Award in Service. The Distinguished Faculty Service Awards are given annually to faculty who have made exceptional service contributions to UofL, their profession, the community or region, national or international service, and career of service. Dr. Sandhu received this prestigious, Career Achievement Award on September 9, 2013 at the Celebration of Faculty Excellence. On August 23, 2013, the Council for International Exchange of Scholars (CIES) has awarded Dr. Sandhu, Fulbright Senior Specialist Award.

Dr. Sandhu was honored as the Outstanding Counselor Educator from all the nationwide tenured counselor educators at the annual convention of the Association for Counselor Educators and Supervision held from October 16-20, 2013 at Denver, Colorado. On October 25, 2013, Kentucky Counseling Association honored Dr. Sandhu with its most prestigious, Kearny Campbell Memorial Award.

Dr. Daya Sandhu received India's highly prestigious Hind Rattan Award on January 25, 2014 in New Delhi. The HindRattan (Hindi phrase translated to English as "Jewel of India") is one of the highest Indian diasporic awards granted annually to non-resident Indian citizens (NRIs) by the NRI Welfare Society of India, an organization under the umbrella of the Government of India. The award ceremony is attended by senior members of the Government of India and of the Supreme Court of India.

Most recently, Dr. Daya Singh Sandhu was also honored with the most prestigious, 2014 ACA Presidential Award, at the Annual Convention of the American Counseling Association held at Honolulu, Hawaii from March 27-30, 2014. Dr. Sandhu's outstanding counseling career as a scholar, educator, and mentor was highlighted with much praise and adoration.

Dr. Sandhu served on CACREP Executive Board of Directors for five years (1996-2001). While on this board, he also participated actively in developing and revising standards for CACREP accreditation in general and Social and Cultural Diversity in particular. Presently, he is serving on CACREP's visitation team to evaluate interested universities program for much desired national recognition through CACREP accreditation.

Dr. Daya Singh Sandhu served as the president of the Association for Multicultural Counseling and Development (2009-2010), a national division of ACA, and started Association of Mental Health Counselors in India. As the Chair of the International Committee of ACA, he has started ACA International Counseling Interest Network which is poised to become the newest and the 21th division of ACA. Currently, there are approximately 600 members of ICIN and 359 of these members are on Facebook. The International Counseling Interest Network (ICIN), proposed and launched by Dr. Daya Singh Sandhu is one of his major life time professional accomplishments to validate counseling as a major profession to address mental health challenges worldwide. Internationalization of professional counseling is truly Dr. Sandhu's signature contribution to ameliorate psychological afflictions of humans throughout the world.

Through his publications and cutting-edge research, Dr. Sandhu has become the cynosure of his colleagues and students. The sharp focus of Sandhu's research on the most current issues of social justice, human rights, diversity, equity, and empowerment of marginalized populations have made Dr. Sandhu as a popular researcher and scholar. Dr. Sandhu's selection as a Fulbright Senior Research Scholar in 2002 and second time again as a Fulbright-Nehru Senior Research Scholar in 2010 is a clear testimony of Dr. Sandhu's brilliant and an illustrious career.

Dr. Sandhu's contributions to the field of counseling are solid and substantial. Not only in the United States but throughout the world, Dr. Sandhu has established himself as a leader, educator, researcher, and a scholar of a very high caliber. As evidenced through numerous awards, honors, prizes, and accolades, Dr. Sandhu's professional contributions are at par excellence.

Here are some observations made by eminent scholars from the fields of professional counseling and counseling psychology about Dr. Daya Singh Sandhu as a person and as a scholar. Dr. Charles Ridley, Dean for Research and the University Graduate School, Indiana University wrote about Dr. Sandhu: "Reading Dr. Sandhu's autobiographical account, "An eco-cultural analysis of agonies and ecstasies of my life in the Handbook of Multicultural Counseling <.i>brings to mind the words of the late Dr. Martin Luther King Jr., "Never judge a man by the heights he has ascended, but by the depths from which he has come from."

Dr. Joseph G. Ponterotto, a worldwide leading authority in the area of multiculturalism and the senior editor of the Handbook of Multicultural Counseling (2001): "Impressively, despite challenges and traumas experienced throughout his life, we note in Dr. Sandhu's story a deep sustaining spiritual connection that has assisted him in maintaining a love of life and work. He appears to have found deep meaning in his life experiences that inform and guide his ground breaking professional work, which includes classic books and journal articles on fighting racial prejudice, gender inequity, and youth violence. He is clearly a renaissance person, a multicultural person (p. 157). Ponterotto, J.G., Casas, J.M., Suzuki, L.A., & Alexander, C.M. (2001). Handbook of Multicultural Counseling (2nd ed.). Thousand Oaks, CA: Sage.